What exactly is Everyman, the show that we're reading as part of Pageant Wagon Theatre?

Well, you might know that it's a medieval morality play. You might have even read it in a first-year drama course.

But what is a morality play and what makes it interesting today? To help find out, here are 7 things you probably didn't know about Everyman!

1. Everyman is a character meant to represent all of humankind. 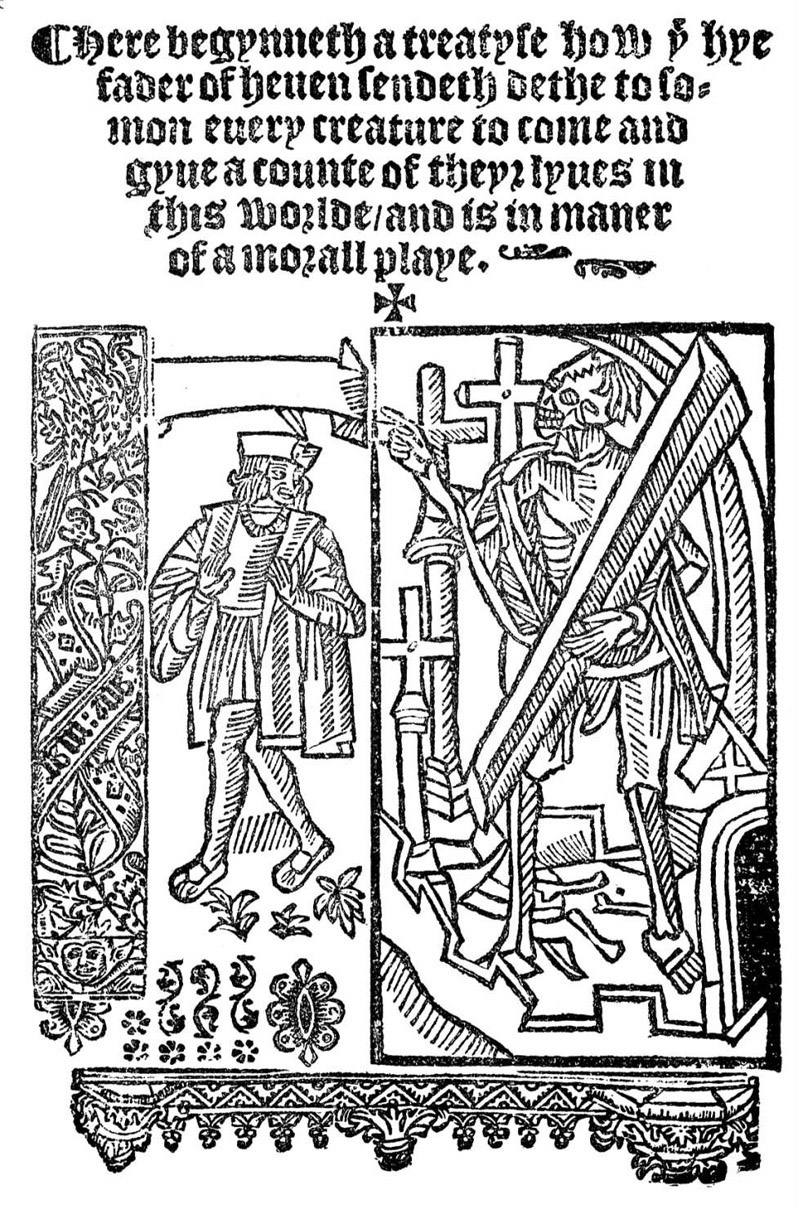 It used to be very common in drama to use allegorical characters to examine larger societal issues. In this case, Everyman is used to examine the question of Christian salvation and what we all must do to attain it.

He is characterized as a successful English merchant who consistently strays from the path to moral righteousness - a characterization that was meant to sermonize to the city-dwellers who would watch the performance in town squares and inn yards all over the medieval world.

2. Everyman learns valuable moral lessons in a confrontation with Death.

Everyman learns that Death does not permit earthly pleasures (like material goods) on the journey of spiritual transcendence.

Instead, the truly valuable things are often ignored, like acts of service or charity. Those good deeds are the only things we can offer to God for eternal salvation.

The whole purpose of a morality play is that we're supposed to leave having learnt something good for our soul. Sounds good, right?

3. Death is a character in Everyman: strange to us, but normal to a medieval audience

Attitudes to death in this medieval play may strike us as odd because medieval and 21st-century approaches to death could not be more different.

In the middle ages, death was very present. Think of all the dangers that lurked around every corner in medieval life.

Through Everyman, we can bridge the gap between ourselves and the medieval world to remind ourselves that life and wealth are ephemeral and that what truly matters is our relationship with each other and with God.

4. Everyman was written after the time of the Black Plague

Now, we're not saying that there's any direct comparison between the medieval pandemic and our own.

In fact, Everyman was written in a period called the Crisis of the Late Middle Ages. That's because a whole series of major disasters took place one after another in quick succession.

But much like many of us have been re-examining what is truly important to us in the wake of the current crisis, the anonymous playwright who wrote Everyman was also clearly picking up on a societal need to reflect and readjust priorities in the wake of a crisis.

It seems strange today, but until the 13th-century many plays were written purely for reading in quiet contemplation. The few that were performed were strictly intended to be liturgical (as in, part of a church service) and were performed at the altar of the Church.

Everyman, on the other hand, represents a theatrical culture that has gotten its act together. A quasi-professional group of actors who relied on public support would perform these short plays in town squares and, famously, travelled around in pageant wagons from town to town.

Here's a 15th-century description of what those wagons looked like:

"..pagiants weare a high scafolde with two rowmes, a higher and a lower, upon four wheeles. In the lower they apparelled them selves, and in the higher rowme they played, beinge all open on the tope, that all behoulders mighte heare and see them."

6. The play is written in what is called "Middle English"

Wait! Before you run away because of English class in school - Middle English is actually super cool!

During this period, the heavy influence of French from the Norman Conquest let to many features of Old English (think Beowulf) disappearing or simplifying. In fact, by the end of the Middle English period, around 30 percent of English vocabulary was French in origin!

7. Who wrote Everyman? Probably the Dutch.

The truth is: no one really knows who wrote Everyman.

But it's very likely that it was originally written as Elckerlijc, a Dutch play written by Peter van Diest in 1470. There is convincing evidence that the English version is based on the Dutch because many rhymes and translations were copied over.

That's it for now! Thanks for reading this trip into the history and significance of Everyman!

Join us to watch live on November 20 & 21 as we present Everyman with The Second Shepherd's Play as part of Pageant Wagon Theatre!