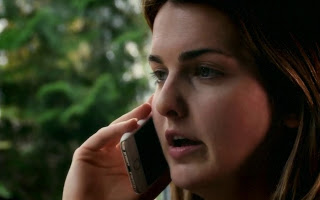 Tell me a bit about the background to your piece: how did you come up with the concept, what was your process in terms of bringing it from concept to final product?

The film was a part of my final integrative thesis project for my graduate degree in Theology and the Arts from Regent College. The focus for my project was on the power of stories, and in particular their ability to be constantly re-told, re-crafted, and re-integrated into the narratives of reality that we live and have lived. With the story of this film I added a contemporary plot to the biblical characters of Hannah from 1 Samuel 1 and Mary and Elizabeth from Luke 1, throwing in some old poetry for good measure and seeing what new emotions and perspectives could be garnered through this new mixture of old characters and story arcs.

The Executive Producer of the film was my project supervisor, Iwan Russell-Jones, former professor at Regent, and he guided the script through numerous revisions in early 2020 before I started with other aspects of the pre-production phase. Actors and crew members were hired through a combination of previous connections and brand new ones through various online audition/for hire sites. I hosted a script read-through with my cast of Kennedy Sloane, Magalie R Bazinet, and Victoria Maier, as well as a set walk-through with my Director of Photography Amy Louise Baker before beginning our three days of shooting in early March just before the pandemic restrictions hit BC.

Our production crew included the aforementioned actors and DP as well as myself, my brothers Adriel Brandt (assistant director, sound tech), Micah Brandt (behind-the-scenes/additional footage), and Alison Jeffreys (hair/make-up). I edited the film over the next couple months and hired former classmate Karen Tuttle to compose the music for the film. Finishing touches included a colour grade and sound mix by Brendan Taylor and a magnificent (pun intended) title crafted using a from-scratch font designed by another former classmate Daniela Amestegui.

Anything you feel is vitally important for audience members to consider as they engage with your piece?

The title of the film is a reference to a song sung by Mary upon meeting Elizabeth (beginning with the line “My soul magnifies the Lord"). In it she thanks God for being mindful of her and for being the kind of God who flips upside-down the structures and hierarchies that oppress certain groups of people. Storytelling is a powerful tool that can either strengthen these damaging structures of society or, in line with Mary's God, subvert them. It can simply maintain dominant narratives or it can try and elevate new perspectives.

It is my humble hope that this film (which, thankfully, was made not by me alone but with substantial input and creative contributions from many other people) might be able to "magnify" the powerful stories of Hannah and Mary and Elizabeth that might sometimes get neglected in favour of the more famous larger narratives that they are a part of, and that it might also give audiences a new perspective on the familiar plot arcs and characters, while also giving new weight and voice to the familiar and eternally relevant themes of pain and healing and broken relationships and reconciliation.

Magnificat will be screened on October 16 & 17 as part of Abby Theatre Fest: Stage to Screen Edition. For complete details and to purchase tickets, please visit HERE.