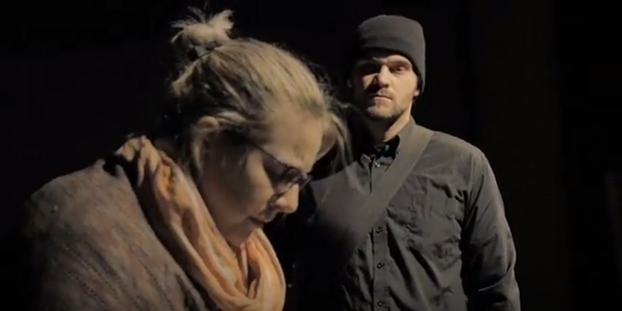 To give you a little insight into the shows, we asked each director to answer a few questions about their shows and the process! Next up, it's the director of Reflections, Rebecca Laurenti!

My cousin suggested this play after I toiled to find a one-act that truly captivated me. As a director, I must believe deeply in the meaning of a play to commit my creativity to it. If I don't, it is simply not worth my time and energy. I knew what I was looking for and when I read the script, I knew I had found it! The fact that the characters are based on real people whom the Playwright met at a Soup Kitchen completely sold me.

Also, after reading the script I felt almost compelled to direct it because of the number of people who are roaming our streets without a voice. So as a director, I felt like I was gifted the opportunity and immense responsibility to shine a light on these situations and to confront the stereotypes with the truth. Even if it is only for 30 minutes, I have no doubt that those minutes will multiply in the minds of the audience members after they leave the theatre. That is why I chose it.

Jim Harrison: Shhh! His character is meant to be a surprise for the audience and he's in love with that concept!  However Jim is a tall guy who rides a motorcycle to rehearsals! His jokester demeanor and jack of all trades theatre background makes him a huge asset to this team. If he was a fruit he would be a pickle.

Shannon Pauls: Her character is an elderly woman so Shannon has had some fun turning her hair gray! Shannon is a full blown artist to say the least: actor, composer, piano player, photographer, and baker. The way she continuously dives head first into her script with unrelenting passion is a joy to work with! If she was a fruit, she would be a strawberry.

Paul Hill: His character is a troubled middle aged man who has been diagnosed with schizophrenia; in short, he's got his hands full as an actor! His eagerness to learn and incredibly contagious smile is a blessing in the rehearsal hall. He is new to the stage and is currently going back to school for Theatre Arts to see what all the fuss is about. If he was a fruit, he would be a cantaloupe.

Rebecca Dougan: Her character is in fact of the opposite sex! Yes, Rebecca is playing a reckless teenage boy who is couch surfing. The fact is, this is quite normal for Rebecca, however she seldom plays a serious role, but a goofball in comedies. She is well versed in theatre and does quite a bit of directing herself! She learned a 1,319 word monologue in under two weeks, so she is also quite the master of learning lines! If she was a fruit, she would be a passionfruit.

Cameron McKerchar: His role is stage manager extraordinaire. His brain works in magical ways of categorization, practicality, time efficiency, and memory retention that are essential to this process. He is no stranger to Gallery7 and is a fiend when it comes to taking on every position Community Theatre has to offer! If he was a fruit, he would be a blueberry.

I got involved in theatre when I was quite young, first roaming backstage and colouring during my parents' rehearsals. I eventually joined a kids theatre in my hometown and was suddenly hooked! I remember thinking that being in front of a crowd felt more comfortable to me than normal life.

G7 audiences may have seen me as Fighting Prawn (crazy Italian islander) in Peter and the Starcatcher or as the young Helen Keller in The Miracle Worker. The thing I love about theatre is that I can continue playing with my imagination just like when I was 4 years old in my room with the door locked. Except now, there is no door but an open stage!

Do you like grappling with deep subjects; subjects that make you stop and reevaluate the way you've been perceiving the world? Well this is the play for you because it is about three innocent people who have been dealt a hard hand in life. They are not only struggling with survival, but with the burden of society's expectation and judgment.

What excites me is the fact that this showcase is an "out of the box" type of showcase for Gallery7. In my opinion, it is a chance to go beyond the limits and perhaps make audiences shift in their seats a bit. I also love eating Tapas, and as a Theatre experience, who wouldn't want a taste of a little bit of everything?

Someone who is ready to see things differently. Someone who is not afraid of being uncomfortable with the questions. Someone who is yearning to grow in their character and faith. And of course, someone who is intrigued by being apart of a theatre experience, rather than merely being a spectator.