Rehearsals for The Miracle Worker by William Gibson are already underway at Gallery 7! We can't wait to see the result of all the work that our phenomenal cast and crew will put in over the next months.

To give us a sense of where the production is headed and what we can expect to see, we asked Jessica Garden, the production's director, to tell us a little bit about herself and what the show means to her.

Tell us a little bit about yourself. How did you get into theatre and directing?

I was introduced to theatre while a student at Trinity Western University where I encountered an amazing community of student artists and professors. It's been a privilege to put my education to work as the Managing Producer for Dark Glass Theatre, a company founded in 2016 which exists to tell stories that bring us face to face with those we might not otherwise meet, thereby decreasing judgment, increasing compassion and fostering empathy.

Most recently I have had the opportunity to produce and assistant direct Dark Glass Theatre's productions of disPLACE: Refugee Stories in Their Own Words and Ruined by Lynn Nottage.

What makes you excited about directing The Miracle Worker?

The Miracle Worker was the first play that I saw as an undergraduate and it is a beautiful 360 moment to be directing it myself so many years later.

When I first saw The Miracle Worker, I was mesmerized by the compelling performances and deeply moved to learn more about the story of Anne Sullivan and Helen Keller. In the same way that Helen's mind and soul are awakened through the discovery of language and her own personhood, I felt as though I too were being awakened.

This play introduced me to the remarkable medium that is theatre and the ways in which it allows artists to explore and share important stories and discover their own truths through the portrayal of others' lived experiences.

How does The Miracle Worker speak to you? And further, how does it resonate in the 21st century?

Many of the characters in The Miracle Worker suffer a sense of disconnection and loneliness as a result of the trauma they have experienced. Helen's illness prevents her from communicating fully with her family, her mother desperately attempts to prevent her from slipping further into herself, her father grieves over his inability to relate to his wife, daughter and son, James feels abandoned by his father after his mother's death and Annie has been unable to love another since the death of her brother. The play emphasizes the importance of finding hope in the face of trauma and retaining that hope by connecting with others. Ultimately, the entire Keller family and Annie experience an awakening when they learn the importance of not giving up on one another.

As Annie Sullivan so poignantly states in the play, abandoning someone in need of help is “the original sin.” This is especially difficult to digest when we think about applying this philosophy to those that are the hardest to reach, to rescue, to love. Who is the “other” in today's world that needs connection in order to begin healing from trauma? The drug addict on the street corner, the teen bullied by her peers, the newly landed refugee, you, me?

The play so beautifully emphasizes the importance of spiritual connection and is especially relevant in a time where matters of the soul are often ignored in favour of political gain, social media popularity and status. 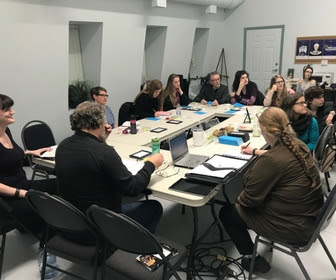 The show has been cast and started rehearsals—how has the process been so far and what can you tell us about the cast?

This rehearsal process has been a gift. Working with such a dedicated, talented and committed cast, design team and crew is such a pleasure. The actors not only value the opportunity to share their gifts with a wide audience, but also feel a responsibility to ensure that we do justice to Annie Sullivan, Helen Keller and her family by fully realizing these characters and the trauma and miraculous awakening that each of them lived.

It has been remarkable to witness the beautiful relationships that have already developed amongst the cast, both on stage and off. The intensity of the themes explored in this important play is offset by the loving, humorous and kind interactions that take place at each rehearsal. It's wonderful to hear cast members express that they already feel like this ensemble is a family.

Based on the work I've witnessed so far, I know that this play will be a sight to see once fully realized.