Top 5 Facts about John Patrick Shanley: Who is the Playwright of Doubt?

Doubt, A Parable is a Pulitzer Prize-winning play and was adapted into an Academy Award-nominated movie starring Meryl Streep and Philip Seymour Hoffman. But who is the playwright behind this masterwork of contemporary American theatre?

We did some research and discovered that it wasn't  an easy road for Shanley. Here are our top 5 facts about John Patrick Shanley, the person behind the work.

1. He did not succeed academically at first 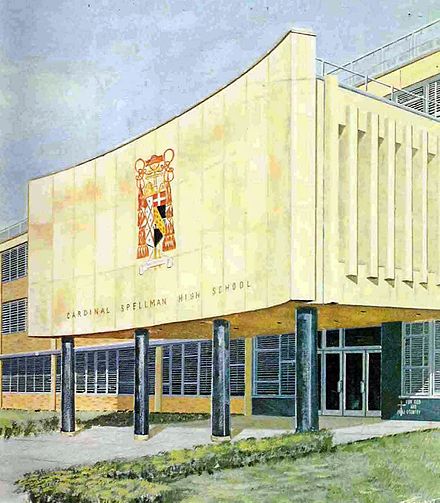 Cardinal Spellman High School from which Shanley was expelled.

Unlike all those famous writers who were seen to be destined for great things at a young age, Shanley had a troubled start to his life. Growing up in the Bronx in New York City, he lived in an area that many New Yorkers considered to be one of the roughest parts of the city. According to his program bio for the Broadway production of Doubt, Shanley was "thrown out of St. Helene’s kindergarten, banned from St. Anthony’s hot lunch program and expelled from Cardinal Spellman High School."

However, while he was in high school, he was heavily influenced by one of his teachers, Sister Margaret McEntee (who he would later fictionalize as Sister James in Doubt). He also saw two productions, The Miracle Worker and Cyrano de Bergerac, that sparked his love of theatre.

After finally graduating high school, he was put on academic probation from New York University after his first year and enlisted in the Marines during the Vietnam War. After his service, he returned to university and, with the help of the G.I. Bill, was able to graduate from university as valedictorian in 1977.

After winning an Academy Award in 1987 for Moonstruck, Shanley was give the rare chance to write and direct a big budget romantic comedy: Joe Versus the Volcano. The movie starred Tom Hanks and Meg Ryan, easily two of the biggest stars of that year. Hanks' character is a downtrodden man living in New York who contracts a rare disease and is given the chance to travel to the South Pacific and throw himself into a volcano on behalf of the superstitious locals. Along the way, he meets Ryan's character who is the captain of the ship that takes him to the island and they fall in love.

The movie received mixed reviews from critics and tanked at the box office, with Time calling it a "wan bit of whimsy ... [that] makes no more sense than its synopsis." However, years later, it has become a cult classic with Time now labelling it as one of their 'Guilty Pleasure' movies, saying that "if you set aside the routine comic expectations its marketing encouraged, you may find yourself entranced by a movie that is utterly unique."

3. He had written 16 plays before Doubt

Before finding success in 2004 with Doubt, Shanley had written some 16 Off-Broadway plays that were given lukewarm reviews by New York critics. In 1983, his first play, Welcome to the Moon, was staged as part of a series of one-acts - the Times called it "sophomoric." A series of plays along similar lines followed, all of them derided by critics. After a while, Shanley was nearly broke and decided that he might have more success by writing a screenplay - what followed was a script he called "The Bride and the Beast." Starring Cher with the final title Moonstruck, it was an instant success and a box office hit.

However, after his failures in Hollywood in the 90s, Shanley returned to the New York theatre scene and penned a series of plays that were produced Off-Broadway. But still, critics were not kind, with Christopher Isherwood of the Times reviewing Dirty Story, the play he wrote right before Doubt, as "drenched in ponderous, explicit talkit has the soggy consistency of an overdressed salad."

4. He isn't driven by fortune and fame

Perhaps due to his troubled upbringing, his long struggle to find success, and a later fight against eye disease that caused him to temporarily go blind in one eye, Shanley doesn't seek out the limelight, despite his distinguished career as a playwright and director.

Instead, his main motivation seems to be to do nothing but write. As he said in a recent interview, you can "get caught up in moviemaking and celebrities and money and it’s very intoxicating, but it doesn’t give you what you need. Money is like heroin, and I grew up in a neighborhood that was destroyed by heroin. I've watched addiction all my life. Celebrity is like heroin. And constant praise is like heroin. And, you know, no one can resist constant praise. I had to get out."

5. Even after Doubt, it hasn't been easy for Shanley

In 2008, Shanley was fresh off the success of the film version of Doubt and ready to take New York by storm with his first major musical, Romantic Poetry. In an interview before the opening, he said: "I think that the show sort of reminds you of what you already knew about how exciting life is and about how central the romantic experience is and how hand-in-hand it is with the spiritual experience. I think the audience is going to drink it down like thirsty people for water!"

Instead, the new musical had easily the worst reviews that any major 21st century musical has faced. The New York Times called it "tedious" and "undigestible." The show closed quickly and quietly a few months later.

Still, Shanley doesn't take a hard view of his career, saying: "It definitely helps in every area of your life when you're older. You go, "I've been through this before, and it's not the end of the world, it's just the next page in the story." In addition to the ones that are going to be popular I'm very experimental, like, "Well, let's try a musical, let's be silly."

While it hasn't been an easy road for John Patrick Shanley, Doubt, A Parable, is easily one of the most important modern American plays and dives deeply into a central question of our time: how and why we believe what we believe with such strong conviction and how that conviction affects those around us.

The show opens January 26 at the Abbotsford Arts Centre's Community Arts Addition and runs through February 10. Join us for this contemporary classic!