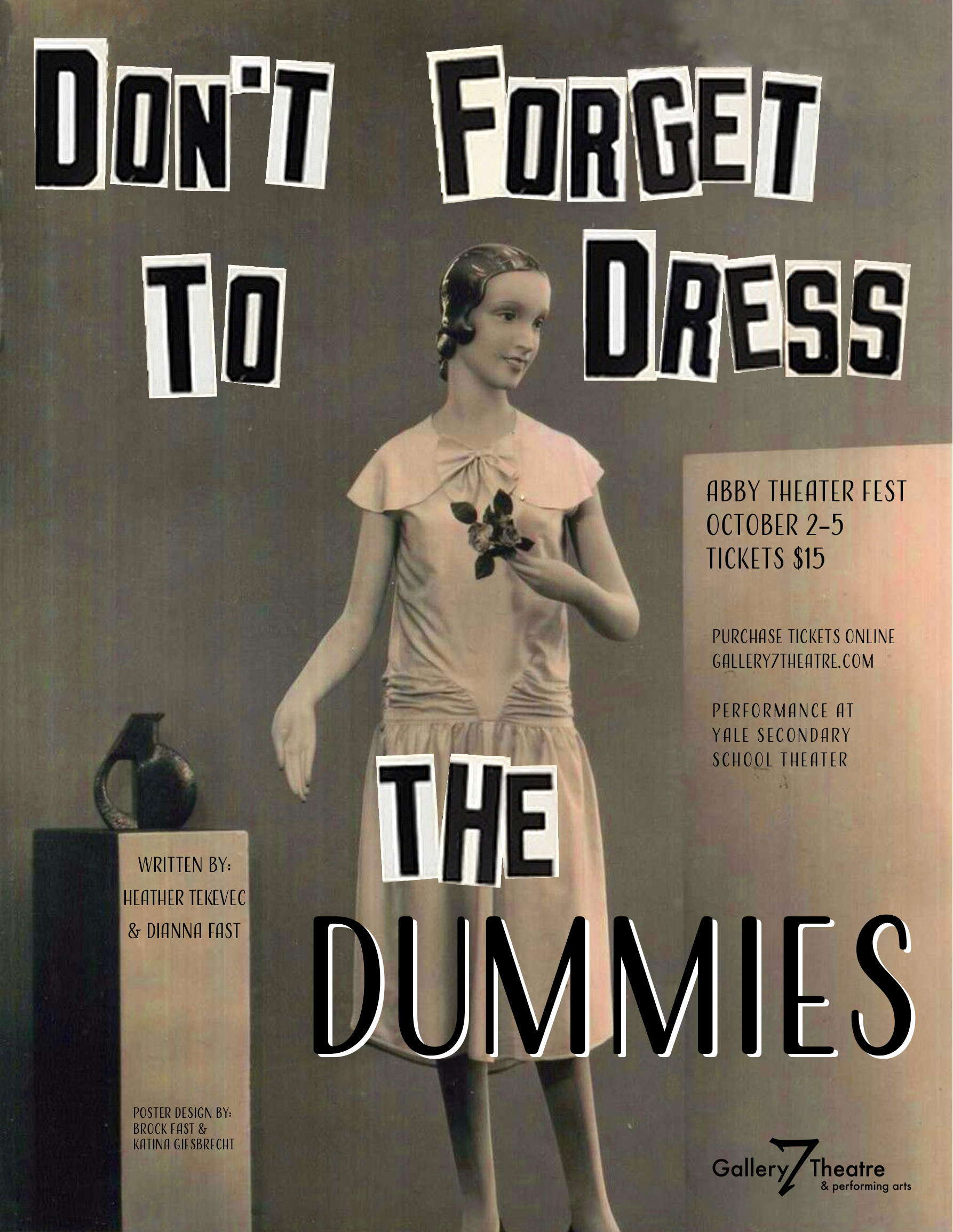 "You just need to come see it!": Q&A with director, Dianna Fast!

What made you write this play?

With my writing friend, Heather Tekavec, we decided to write this play for 2 reasons.  Heather and I had written 2 musicals previous to this and it's kind of what we enjoy doing. We had started talking about writing another one when Ken invited me to apply to do one of the one act plays this fall.  I thought well we could write one and try to put it in the festival, so we did!
Heather already had developed the concept and was going to use it for one of her children's books (she's written and published many!), but it wasn't really a great fit for children so we started writing from that. This is the first play I've collaborated on that will be with Gallery 7 and I'm thrilled how it turned out.

I love my cast.  When I searched for the personalities I needed, I managed to find exactly what I needed.  My stage manager, it's his first time being a stage manager, has been so very helpful and efficient, which has been a huge blessing. His name is Todd Klassen and I met him and the lone male in my show who plays Mr. Rockbottom, Angel Duron-Heon, in the recent production of Joseph at gallery 7.  Because I already knew them, it was easy to place them in the show.
The ladies, Holly Zonnefeld, Kristi Robertson and Kailea de Leon, are really great in their roles - I must say they were cast brilliantly!  We've got a leader, bossy type character, a ditzy follower of the leader and a sweet simple accomodating character.  They're all different characters which ends up making a nice blend for the show and for entertaining audience members!

So my debut with Gallery 7 was Mrs. Potiphar and ensemble in the recent Joseph and the Amazing Technicolour Dreamcoat production back in the spring.  You see, I have been very involved in directing Langley Fundamental Middle Secondary School's musicals over the last 11 years.  In that time, I directed 6 full production musicals, my favourite being Shrek and Beauty and the Beast.  This year we are producing the musical Frozen Jr. and the students couldn't be more excited. In that 11 years, I've also directed 3 church Christmas musicals.  Along with my writing partner, I've written two of those productions.
I really love theatre and get a huge amount of energy when I'm doing it.  You could say I'm really passionate about Theatre!  Because I love it so much, I finally decided to try being in a show rather than just directing and that's when I applied for Joseph.  I wasn't sure if I'd get anything, but I just wanted to be involved.  I couldn't believe the opportunity I was given.  And my experience being in a musical was even more amazing than I'd anticipated and so you could say I'm hooked.  After the run of Don't Forget to Dress the Dummies!, I'm starting practises for the role of Donna in Mamma Mia with Fraser Valley Stage.  I'm so excited to start that journey for sure and who knows where this could lead.  I just wanna do theatre, so I'll keep doing it!

This play is set in the 1950's in a small town Clothing Department store, R's Department Store.  Mr. Rockbottom, the store boss, decides to purchase a mannequin for their store front window to help boost sales.  All the big city stores are having success with their mannequins, so he's pretty sure that his idea is going to take off, and he's absolutely right.  He assigns Isabella, the store maid/janitor, the new important job of dressing the dummy everyday.
As the days go by, the sales go up, so Mr. Rockbottom is very pleased with Isabella's work. The sales ladies, Gladys and Mabel, are jealous of Isabella's attention and praise so they make a plan to see what would happen if Isabella didn't dress the dummy.  Their plan works and chaos insues.  It's got super cute ending, that I won't tell you  - you just need to come see it!

It's amazing how much talent is out there.  A lot of the plays this year at the festival have been written by local talented people.  I guess I love that people are doing what they're passionate about and Gallery 7 is making it happen.  5 shows in one night - sounds like an entertaining night out!

Don't Forget to Dress the Dummies is part of Abby Theatre Fest—get your tickets now!