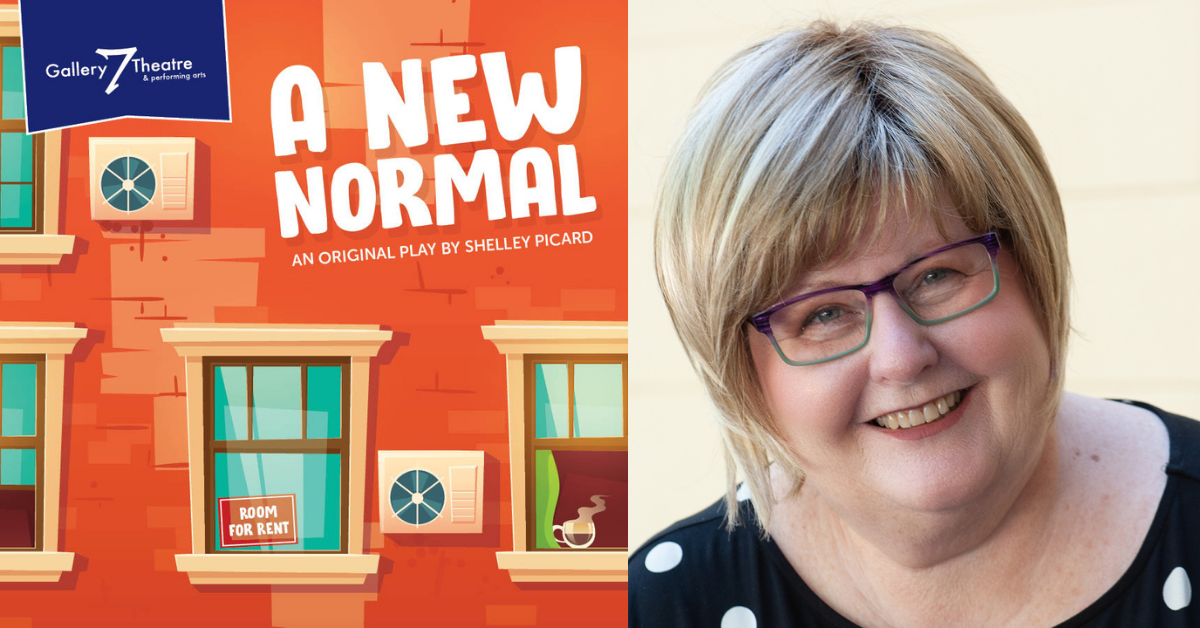 "Human and real": Playwright Shelley Picard on A New Normal

On May 28, we will be debuting the world premiere of A New Normal, a show written by local playwright Shelley Picard.

We're so excited for the world to see this phenomenal new play, so to get a sense of what to expect we asked some questions of none other than Shelley Picard!

What is the story of A New Normal? Tell us a little bit about the play.

Beyond the outline featured on the Gallery 7 web page . . . . A New Normal is just a play about people. In this case – a group of women. It explores the hidden truths that haunt people and disempower them under the critical eye of others. It explores the limitations that we wrap around people based on first impressions. It explores the judgements levied but not earned onto people who are considered ‘different’. And – ultimately – it is a lesson in acceptance . . . support . . . . connection . . . and revelation.

There are no heroes in this story but just a group of flawed women who find ways to change their lives from what is the expected ‘normal’ over to a life of newness and discovery.

As a playwright, what is it like seeing your play being performed?

Well I will be honest in saying that – for me – seeing one of my plays being brought to life is exciting and humbling. It is wonderful to watch a director take the words and the characters and to mold them and blow life into them.

It is remarkable to see the actors embrace the roles and work to define and present a believable and compassionate performance. It makes me want to write again.

You're also in the show! Tell us a bit about what it's like performing your own play. Is it strange? Exciting?

Well, luck me – this is actually the second time I have had this opportunity. The first – in my play Slow Dancing – where the director allowed me to audition with everyone and ended selecting me for the lead. With A New Normal – my transition into the role was a little different and perhaps unexpected and certainly nothing I had expected . . . but I said yes and jumped in with both feet. I was very thankful that the cast immediately embraced and encouraged me.

I’ll be honest – this role was a difficult one for me. This character is so multi layered and so fragile . . . by the time our filming was done on Sunday, I was spent. The excitement was in those moments where everything just clicked and time stopped for just a moment. It was electric and emotional and SO fulfilling. While I would not have chosen to perform in this show . . . I believe I was given a rare gift to be able to.

Are there any parts of the show that you're particularly looking forward to seeing in the final version?

I have to say yes to that. There are several. While the story has some emotional punches it also gives some whimsical moments and it was the eye of our Director – Jacq Ainsworth – and her coaxing and supportive approach that allowed for those moments to evolve naturally and spontaneously. I truly believe that there is something in this show for everyone.

What can audiences expect to see when the show starts rolling?

Well, certainly honest and committed performances by all the actors. We allowed ourselves and trusted each other enough to let the results create themselves. Of course there was rehearsal and planning but none of us were really prepared for the “virtual” environment. It is a shocking difference from live stage work. Not the same kind of progression that can build to the electric moments and so we just needed to let go of all the barriers and trust the words and each other to reach where we needed to go.

As all the information says – there is mature content in this story. Those parts are written from very real experiences. I am confident that this part of the story will release emotion but hope that it also demonstrates hope. You know, that the camera is close and so the audience will experience everything that the characters do.

There is no majestic scenery to distract or special effects. All of the effects are human and real.

Who will love this show?

Well, my hope is that everyone will. In the words of my character, Maggie ‘ None of us is perfect. We all have stuff. Baggage that we carry’ . . . which leads me to believe that most people will find some identifying moments throughout the show.

My hope is that the story elevates – teaches and maybe even heals. I know that is what it has done for me. I will be perfectly honest and say that there definitely pieces of my own life in this show and the whole process from the writing to the wrapping has been quite cathartic.

Hope that our audience comes away feeling better for it as well.